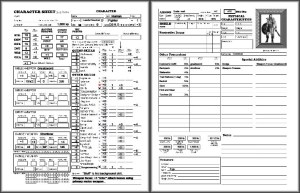 These are fast-play first level character sheets for Dungeons and Dragons Lite.

They are multi-layer PDF files. When you open them they will be unreadable until you turn off some of the layers. To use them simply turn off all of the layers except for those that contain the information you desire.

1) Download the front and back sheet for your character’s race.

2) For a blank sheet – turn off all of the layers except for the “Sheet” layer.

3) Turn on the “Class” layer for the class you are going to play to get all of the standard information, including the default equipment, for your character. You can print this out and it will be ready for you to add a background skill and to roll your ability scores. Everything for a first level character will be filled in that is not dependent on your ability scores.

4) Turn on the “Abilities” layer for the class you are going to play to get a ready-to-play character sheet. Everything except the character’s name, sex and description will be filled in and ready to use. The “Abilities” layer and the “Class” layer must both be for the same class or the numbers won’t add up correctly.

5) Optionally – on the Back sheet – you can turn on a “Sketch” layer for your character class. This will give you a drawing of your character. (These were all found on the internet, converted to black and white and scaled to fit on the sheet. They are all male characters.)

EXAMPLE: If you want a ready-to-play first level Half-orc Monk character. Download the files “Half-orc-Sheet-Front.pdf” and “Half-orc-Sheet-Back.pdf”. Open both of them using Acrobat Reader. On the Layers menu turn off (by clicking on the little eye beside the layer name) all of the layers except for these: “Sheet”, “Race_Half-orc”, “Class-Monk”, and “Abilities-Monk”. On the Back sheet, you can turn on the layer “Sketch-Monk” for a drawing of the character. Print both sheets (they are designed to print on the front and back side of a single sheet). Now all you have to do is fill in the name and sex and you are ready to play. The character’s description on the back side has been left blank for you to describe him as you see fit.

BEHIND THE DOUNGEON MASTER’S SCREEN

(For those of you that are interested in what I did and why I did it this way.)

This makes for interesting characters with everyone having some ability that they excel at and one that they are very bad at. With most of the abilities above average this makes for heroic characters.

I then assigned the abilities (highest to lowest) based on the character’s class.

I tried my best to make the abilities work well for each class. I am sure others might have assigned them differently.

On a side note – I originally intended to have at least one class have an ability score of 8 (a -1 ability modifier) for each of the abilities, but I decided not to give anyone a score of 8 in Dexterity. Strictly interpreting the rules, if your character’s dexterity score is very low he is easier to hit if he is aware of the attack than if he isn’t! This is the result of a negative DEX modifier on his armor class. This reminds me of Jar Jar Binks leaning into the punches, but I think that even his flat-footed AC would be lower than his normal or touch AC.

Next I applied the standard ability score modifiers for each race.

Then, based on their ability modifiers, I modified or calculated:

I also gave the classes these default Alignments:

A lot of people are not familiar with multi-layer PDF files, but if you have any trouble turning layers on and off just let me know.

This gives you a total of 77 different ready-to-play characters.

Please let me know if you discover any mistakes, or if you think I should have created these differently.