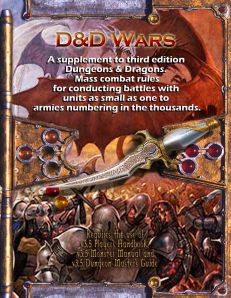 [There is an updated version of these rules available here: D&D Wars ]

D&D Wars is a supplement to third edition Dungeons & Dragons that provides a set of mass combat rules for conducting battles with units as small as one to armies numbering in the thousands. D&D Wars are not simply armies making battle with each other. It is armies intermixed with monsters and NPCs. Added to this mix is a group of PC heroes doing what they can to change the tide of the war.

–My goals in creating these rules —

– The rules must be compatible with Dungeons and Dragons version 3.5.

– There must be rules for creating armies comprised of units of various sizes and compositions.

– It must have consistent rules for scaling the battle from a small group of villagers with torches and pitchforks all the way up to epic battles with thousands of soldiers on both sides.

– The rules must accommodate individual monsters wandering across the battlefield as well as other NPCs and PCs that are not part of the units.

– It must use standard combat rules without modification as far as possible.

Before creating these rules, I tried to find out if someone else had already done this, and I found several who had.

Second, I found several homebrew systems. Most of these are of the “treat a unit as a really large monster” variety. These all work for their games, of course, but most fall short of what I was looking for.

The best of these are described below in no particular order.

This is a Pathfinder supplement.

Even though it is not specifically for v3.5 it is close enough with only minor adjustments.

It is an excellent, well thought out system. It uses a clever idea of making each 1” square represent 10 feet and each unit be represented by a 3”x6” index card.

It also contains information on the upkeep of an army, mustering armies, supplying an army and siege warfare. There is an alternate way to quickly resolve mass combat in only a few rolls of the dice.

It uses a standard 6 second combat round.

It is well presented and I got a lot of good information from here.

It assumes that the PCs are commanders of the army, or at least unit leaders. There are no good rules to allow a PC to act independently from the unit (other than being a solo unit).

There are no rules to deal with units in combat against individual monsters or heroes.

It doesn’t scale well for different size battles. The rules for larger battles are unsatisfactory. It simply recommends that you use larger unit cards and to “be sure you have the space available” for all of the additional space it will take up on the battle matt.

This is a supplement to Conan The Roleplaying Game which is v3.5 compatible.

This is one of the best set of rules that I found. It does a good job of integrating v3.5 rules into a set of mass combat rules.

They have good rules for resolving magic use against units and for war machines.

It treats units as a group of counters, with each counter representing a number of individuals.

It uses a standard 6 second combat round.

It relies heavily on unit formations, unit faces and a special “surge” attack. I wanted to avoid having facing rules. D&D 3.5 has no facing rules for creatures, so I didn’t want to introduce this into my mass combat system.

It is a little vague on how much space a counter covers.

Units do not make saving throws, but always take the average amount of damage they would have received if each individual had made a separate saving throw.

There are no rules to deal with units in combat against individual monsters or heroes.

Wizards of the Coast’s “Complete Warrior”

This official D&D accessory contains a chapter on Fantasy Warfare.

It has a very good overview of how one can integrate warfare into a standard D&D campaign.

It has a good list of ways PCs can tern the tide of battle, with a table of possible missions and mission complications.

It would be good to use if the war is simply going on around the PCs.

It doesn’t have any mass combat rules.

This is a small (5 pages) document that attempts to bring mass combat to d20 games.

It uses standard rules for the most part.

It uses a 0-10 scale for health and attack damage, rather than standard hit points.

Any monster or character would have to be converted to the 0-10 FSP (Force Strength Points) system for both hit points and attack damage.

The system, although workable, is a little too rules light for my taste.

“It’s a mini-game inside regular 3.5e that has been designed for simplicity and a minimum of bookkeeping.”

It introduces a morale score (similar to Hit Points). When the unit’s morale score reaches 0, the unit flees form the battlefield.

It uses squares that represent 50’ x 50’. This is workable, but I wanted more flexibility for larger or smaller armies.

It doesn’t use a simple initiative order, but each army acts in an order depending on its position and type of attack.

It has no rules for anything other than units or PCs (No rules for monsters or siege weapons for example).