Where anyone over 18 can share thoughts and ideas on RPGs. 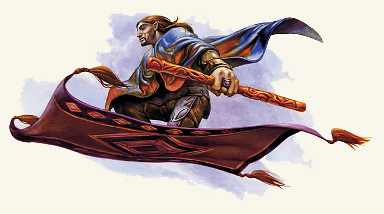 What is Magic? How does it work?

I was trying to figure out how (in 4th and 5th edition Dungeons and Dragons) a character could learn all there was to know about a magic item by simply examining it for an hour. This wasn’t possible in earlier editions. You could only learn about an item by trial and error or by some magical means. It is only now coming up because I never played 4th edition, and this is the first time I have been the DM running a 5th edition game.

After a lot of research (Google is my friend) I finely came to the realization that the nature of magic has changed. To make logical sense out of it all (assuming you can apply logic to the rules of magic in a fantasy game), this is what I came up with.

Nothing below is official. It simply represents my ideas and house rules.

The Source of Magic

Behind reality as the player-characters know it, there is a sort of internal “skeleton”, over which reality exists like skin atop muscle and bone. This “skeleton” can best be envisioned as an unseen essence that pervades all parts of the multiverse, directly linking everything to every other thing. This is the source of all magic. When you cast a spell, you actually create a specific alteration in the local essence, which then causes the spell effect you wanted in the ‘real’ world. Some call this essence “Mana”. In the Forgotten Realms it is called the “Weave”. If the Weave in an area is damaged or destroyed, magic is unreliable or impossible – that’s what creates Wild Magic and Dead Magic zones in the Realms.

Bards learn that words and music are not just vibrations of air, but vocalizations with power all their own. They learn to untangle and reshape the essence in harmony with their wishes and music.

Clerics and Paladins are conduits for Divine magic, the power of the gods. Divine casting is done by channeling the essence provided by their deities and forming spells out of that.

Druids and Rangers revere nature above all, and can draw essence from the land, gaining their spells and other magical powers either from the essence that flows through nature itself or from a nature deity.

Monks make careful study of the essence that flows through living bodies. Most monastic traditions call this ki.

Sorcerers learn to harness and channel their own inborn magical abilities. They gather the essence to them from force of will.

Warlocks receive their magical abilities from a pact they made with an otherworldly being. This is similar to the way gods channel essence through divine casters.

Wizards create elaborate mental structures within the mazes of their own minds, traps which funnel magical essence like a roof collects rainwater for a barrel, stored and ready to be used over the course of a day.

This magical substructure to the universe, this unseen essence, can be manipulated by users of magic. It can sometimes be concentrated and placed inside a creature or object. Examples would include casting a spell on a creature to make it resistant to fire, or creating a ring of protection. These magic infused creatures or items emit a type of magical radiation. A creature with the ability to sense the universal essence can detect this magical glow, but it is invisible to all others without some magical way to detect it.

Magical radiation is similar to light in that it is dimmer the farther you are from it. It can pass through most objects, but is blocked from most forms of detection by 1 foot of stone, 1 inch of common metal, a thin sheet of lead, or 3 feet of wood or dirt. For the magic radiation to be strong enough to be detected by the “detect magic” spell, you must be within 30 feet of the magic creature or item. If you sense magic in this way, you sense the presence of magic, but can’t determine in which direction, or how far away the magic item is. Anytime during the duration of the “detect magic” spell, you can take an action to see if there are any specific items or creatures within sight that you can identify as magical. You will see a faint aura around any visible creature or object in the area that bears magic. If you don’t see an aura around anything, then the magic that you sense must be out of sight. It could be one or more items or creatures that are invisible or hidden. For instance, they could be behind a door or in a box or under a secret panel in the floor.  If you do not see it, you do not see the aura. This also means you cannot use this to locate invisible creatures or objects. Any aura detected can only be seen by the spellcaster. The color of the aura corresponds to the object’s school of magic. If the item has no particular school then the aura has no color. The brightness of the aura indicates the relative strength of the magic.

Unless the magic item is invisible, you can see it if it is within range but behind a transparent barrier, such as glass. You also perceive its magical aura. This includes potions that are in glass bottles. If the potion is in a container that is not see-through you will not see the aura unless you remove the cap and look directly at the potion.

If you were to touch a creature that possesses magic, you would not typically feel the magic. But if you were to hold a magic item for a few seconds (a round), you would feel the magical radiation generated by the item effecting your body and/or your mind in some way. The sensation will differ depending on the magic contained within the item. If you continue to hold the item and concentrate on it for a short rest, “At the end of the rest, the character learns the item’s properties, as well as how to use them.”

“Potions are an exception; a little taste is enough to tell the taster what the potion does.” You can’t hold a potion in your hand. The bottle isn’t magical, just the liquid it contains. You could stick your finger into it, and leave it there for an hour, but a drop on your tongue is much faster. A taste is not enough to receive the effects of the potion. If it is poison, a taste is not enough to do harm to the taster. When tasting it, the magic of the potion enters your body and instantly reveals its nature.

Magic items want you to know their properties! The magic is alive! Or, rather, it contains a life force. All life has magic flowing through it to some degree, and all magic has some degree of life flowing through it. This explains why some powerful magical items possess sentience. The item’s creator forced so much magical essence into the item that it became sentient. This also explains why magical essence tends to be attracted to living creatures (and sometimes to dead creatures). And why magic can create or destroy life.

This spell makes you more receptive to the magical essence of the item. To identify the magic in an object with this spell, you must remain in physical contact with it for at least 1 minute. “If it is a magic item or some other magic-imbued object, you learn its properties and how to use them” (That much is the same as you can get from examination alone. But with the spell you also learn) “, whether it requires attunement to use, and how many charges it has, if any. You learn whether any spells are affecting the item and what they are. If the item was created by a spell, you learn which spell created it.”

To use this spell to identify a potion still requires one minute, but you must come into physical contact with the potion, not just the bottle it is in. A drop on your tongue or on any spot on your exposed flesh is enough.