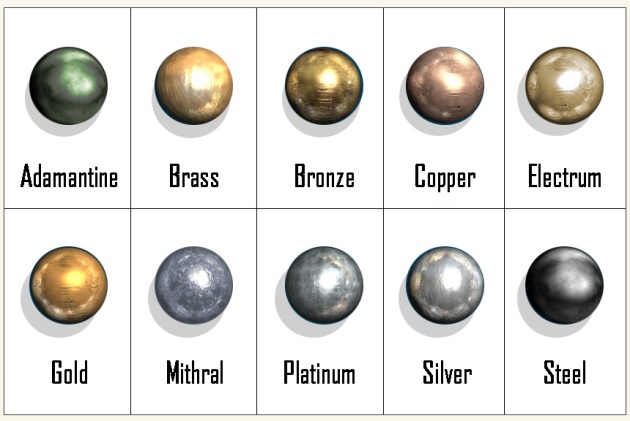 Value of Metals in D&D

Most of the following information is from “VoLo’s Guide to All Things Magical”.

This is the pure metal form of the hard, jet-black ferro magnetic ore known as adamantite, from which the famous alloy adamantine is made. Adamant is rarely found in nature, but when it is, it is always be in large spherical pockets in hardened volcanic flows. Adamant is one of the hardest substances known, but it is also brittle. A sword made of adamant could slice through most metals but would snap off if struck by another blade or even a smartly wielded wooden cudgel.

This alloy, of five-eighths adamant to two-eighths silver and one-eighth electrum (itself a natural alloy of silver and gold) retains the hardness of adamant, but combines it with a rugged durability that makes adamantine so hard to shatter that it is the favored substance for the making of war hammer heads, the best nonmithral armor, and harbor chains. (By one of the miracles granted by the gods, adamantine can also be derived by combining steel and mithral if one knows how. Adamantine is black, but has a clear green sheen in candlelight a sheen that sharpens to purple-white under the light given off by most magical radiances and by will-o-wisps.

Adamantine is tricky to make, and must be forged and worked at very high temperatures by smiths who know exactly what they are doing and who have access to special oils to slake and temper the hot metal in. Almost all such expert smiths are dwarves, as the Deep Folk guard the secrets of working adamant jealously, but a priest or wizard seeking to enchant items can make use of finished adamantine items and need not necessarily have to work with a smith to create an adamantine work anew.

This well-known pure metal, with its distinctive pinkish sheen, is the best widely available purifier and amalgamator among metals. It is soft and easily worked, widely known. The wizard and especially the priest seeking to work with a substance or item not suited to his or her faith or purpose can make the offending item usable by adding at least half the item’s weight of copper to the item. (For example, by sheathing it in copper or adding a longer handle plated in copper, or similar means.) Holy or unholy water should not be stored for any length of time in copper vessels, because the metal will neutralize either in a few months, changing them to normal water.

This well-known pure metal is the softest of workable metallic substances, and one of the best conductors among them. Despite its high value, it is relatively common and is favored for use in ornamentation in the making of magical items, often being used as an inlay in graven runes or inscriptions, where meld magics can keep it from being damaged or falling out through rough handling. Gold has the important ability to hold multiple enchantments, even conflicting ones, and keep them from affecting each other or the stability of the gold-adorned item.

Known as truemetal to the dwarves, this silvery-blue, shining metal is derived from soft, glittering, silvery-black ore found in rare veins and pockets all over, from the depths of the Underdark to surface rocks. Mithral can be combined with steel (varying alloys of iron and carbon) to derive adamantine if one has no access to adamantite ore, but this process is both difficult and known only to a very few dwarves, who do not perform it for nondwarves unless there is a very good reason.

Mithral is the lightest and most supple of metals hard enough to be used in the making of armor; it is extremely valuable.

This relatively common valuable pure metal is known to the elves as “the sheath and shield of Art” because, of all metals, it is the most associated with and suitable for magic. Many dwarves use silver in various alloy formulae of their own devising or that have been handed down through clans for generations. Most of the beauty of metalwork down through the ages has been associated with the gleam and hue of mirror-polished, untarnished silver, and it has always been associated with the adornment of magical items.