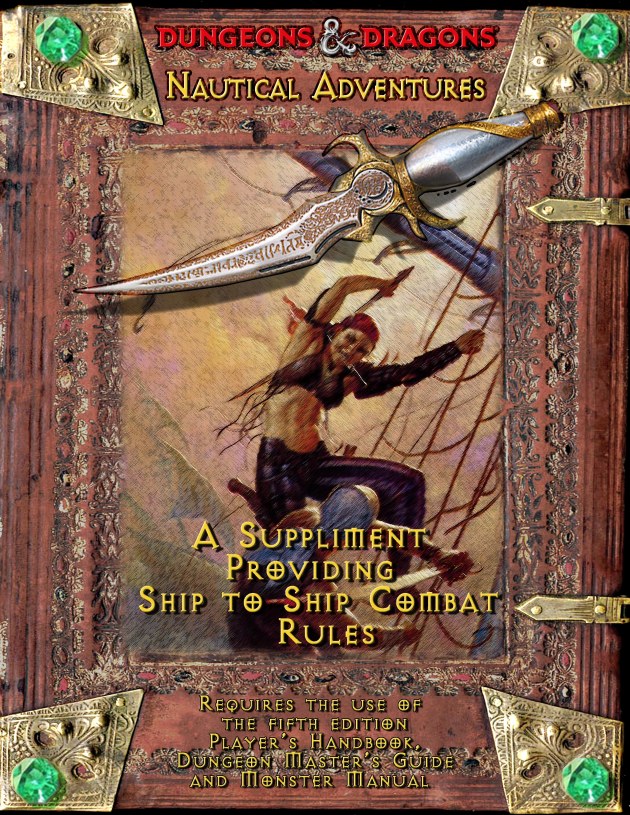 Rules for conducting a seafaring campaign in D&D. Including rules for Ship-to-Ship Combat.

This is a complete re-write of the Ship to Ship Combat rules I published before (3.5 version here).

In keeping with the spirit of 5e, this  is  not  about  conducting  massive  sea battles, moving small model ships around on a hex battle map exploring tactics and the intricacies of wind and sail. Rather this is about what the PCs can do with ships. Ship-to-ship  battles  do  take  up  the  majority  of  the  pages here, but the battles are from the point of view of the player  characters  on  board  their  ship.  Care  has  been taken to assure each payer has something to contribute each round of ship-to-ship combat. Each player controls one of their ship’s officers. That officer can be his or her PC  or  it  may  be  an  NPC  and  he  has  several  actions available to him that are specific to that officer.

I copied liberally from Wizards of the Coast’s 1997 publication “Advanced Dungeons & Dragons of Ships and the Sea”. I also got a lot of good ideas from Pathfinder’s “Skull and Shackles”  (their “Wormwood Mutiny” adventure path will work with these rules for those of you who want a good Pirates campaign.)
I also found a lot of good information in Kenzer and Company’s “Salt and Sea Dogs”.

A special thanks to Shawn at http://tribality.com/ for his series on Naval Combat for D&D 5th edition. He got me to thinking seriously about how to keep all of the players involved in naval combat.